The IPSM, belongs to the geographic class of solution models and is one of several that utilize space and the human relationship to physical geography as a means for classification. 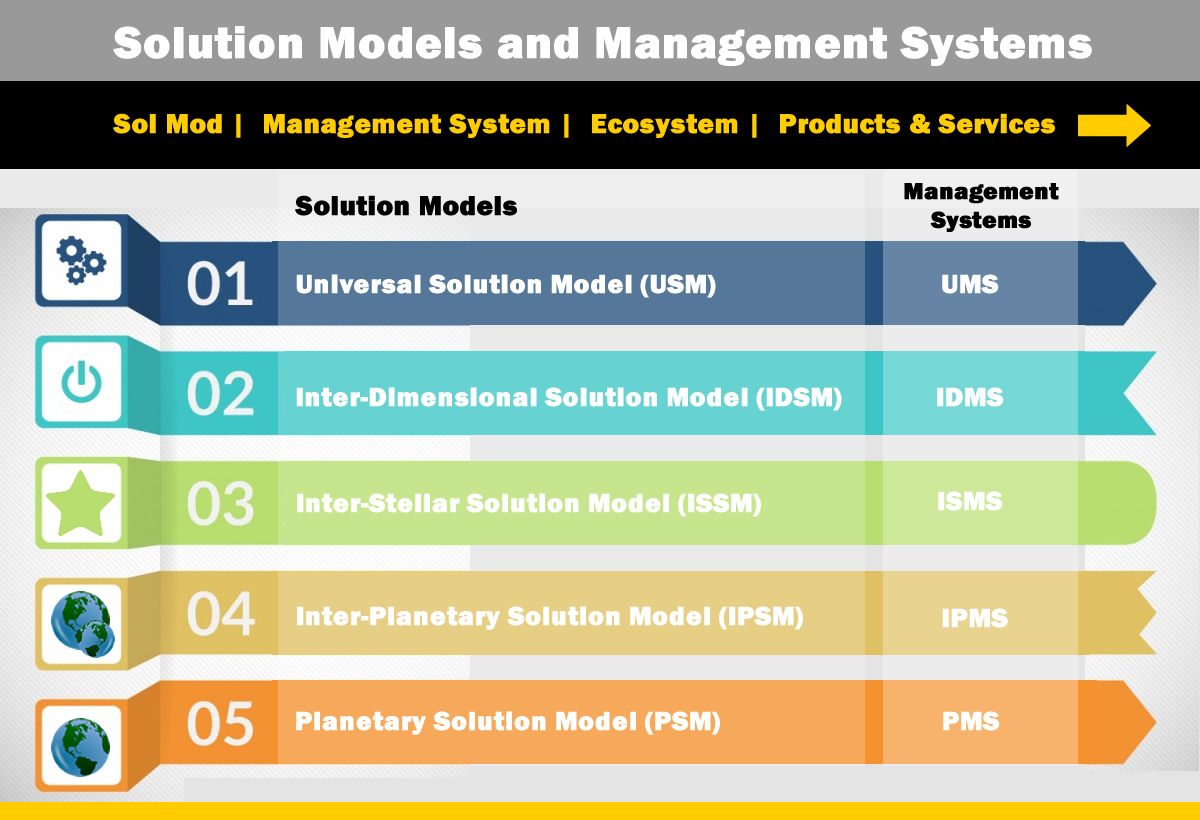 The Geographic Class of Solution Models

The USM gives a general case discussion of Solution Models, Understanding Models, Management Systems, and then extends this to a class specific example from these top level pieces to Science and Technology, Organizations, Ecosystems and Products and Services.

The IPSM, belongs to the geographic class of solution models and is one of several that utilize space and the human relationship to physical geography as a means for classification.

The Inter-Planetary Solution Model (IPSM) is likely to be achieved before we achieve its next class up. Today, we are exploring other planets remotely with inter-planetary probes. Some of the constraints of inter-planetary exploration are many, there is the current day propulsion technology, the human constraints of long term space-travel and the lack of robust ecosystems on other planets within our solar system. This said, there are a number of countries, organizations and companies, including our own that are working on propulsion systems that work in fashions other than brute force mass displacement systems. This is one of the key elements necessary for establishing biosphere based colonies and or terraformed colonies on an otherwise desolate world in the context of human occupancy.

The Scope of the IPSM

What we learn from the Planetary Solution Model (PMS) and the Planetary Management System (PMS) coupled with the respective Understanding Model, related systems dynamics for Life Systems, Physical Systems, Earth Systems and more provide a set of foundation stones for inter-planetary exploration and occupation.

Other Aspects of the IPSM

The IPSM covers things like governance, management, quarantine protocols, standards development, check and balance systems, standards for species classification and other systems in relationship to a multiplanetary ecosystem. Here we include the gambit of celestial bodies from moons to asteroids, to space stations and other non-earth based systems.

This sets up new rights classes, for a variety of celestial bodies, solar, planetary and other which includes moons, asteroids and stations.

Again, the work we have done on codifying these on Earth translates to wider areas of exploration. With this we are dealing with whole new medical and health models as well as energy and environmental solution models. Each of these segment specific models on earth can be repurposed in an inter-stellar and inter-planetary reality.

In astronomy and astrobiology, the circumstellar habitable zone (CHZ), or simply the habitable zone, is the range of orbits around a star within which a planetary surface can support liquid water given sufficient atmospheric pressure.[1][2] The bounds of the CHZ are based on Earth's position in the Solar System and the amount of radiant energy it receives from the Sun. Due to the importance of liquid water to Earth's biosphere, the nature of the CHZ and the objects within it may be instrumental in determining the scope and distribution of Earth-like extraterrestrial life and intelligence.

The habitable zone is also called the Goldilocks zone, a metaphor of the children's fairy tale of "Goldilocks and the Three Bears", in which a little girl chooses from sets of three items, ignoring the ones that are too extreme (large or small, hot or cold, etc.), and settling on the one in the middle, which is "just right".

Since the concept was first presented in 1953,[3] many stars have been confirmed to possess a CHZ planet, including some systems that consist of multiple CHZ planets.[4] Most such planets, being super-Earths or gas giants, are more massive than Earth, because such planets are easier to detect. On November 4, 2013, astronomers reported, based on Kepler data, that there could be as many as 40 billion Earth-sized planets orbiting in the habitable zones of Sun-like stars and red dwarfs in the Milky Way.[5][6] 11 billion of these may be orbiting Sun-like stars.[7] Proxima Centauri b, located about 4.2 light-years (1.3 parsecs) from Earth in the constellation of Centaurus, is the nearest known exoplanet, and is orbiting in the habitable zone of its star.[8] The CHZ is also of particular interest to the emerging field of habitability of natural satellites, because planetary-mass moons in the CHZ might outnumber planets.[9]

In subsequent decades, the CHZ concept began to be challenged as a primary criterion for life, so the concept is still evolving.[10] Since the discovery of evidence for extraterrestrial liquid water, substantial quantities of it are now thought to occur outside the circumstellar habitable zone. The concept of deep biospheres, like Earth's, that exist independently of stellar energy, are now generally accepted in astrobiology given the large amount of liquid water known to exist within in lithospheres and asthenospheres of the Solar System.[11] Sustained by other energy sources, such as tidal heating[12][13] or radioactive decay[14] or pressurized by non-atmospheric means, liquid water may be found even on rogue planets, or their moons.[15] Liquid water can also exist at a wider range of temperatures and pressures as a solution, for example with sodium chlorides in seawater on Earth, chlorides and sulphates on equatorial Mars,[16] or ammoniates,[17] due to its different colligative properties. In addition, other circumstellar zones, where non-water solvents favorable to hypothetical life based on alternative biochemistries could exist in liquid form at the surface, have been proposed.[18] (https://en.wikipedia.org/wiki/Circumstellar_habitable_zone)